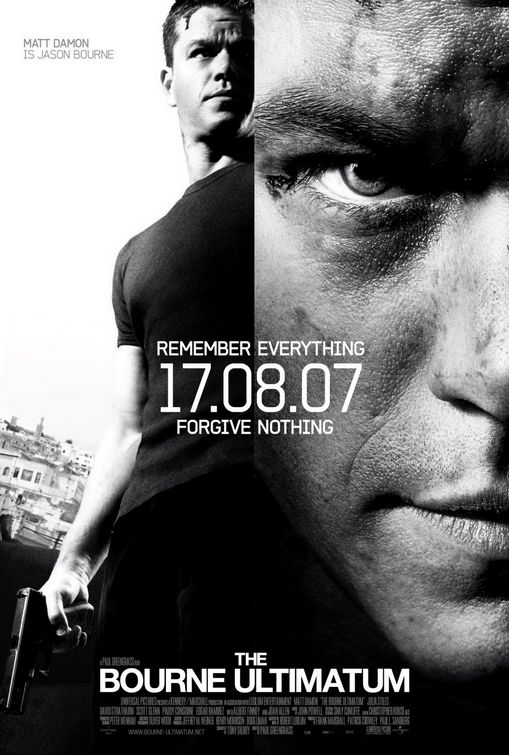 Prelude: The Bourne Series
In the modern era of action films, this series brought some ground-breaking change to the equation as it kicked off with The Bourne Identity back in 2002. I personally have noted many film reviews referencing the Bourne films as though they are now the standard template where it comes to espionage films. Though I wouldn’t give it ‘that’ much credit, I certainly did much enjoy the Bourne Identity on its release. The baby-faced Matt Damon was now more than meets the eye.

Then in 2004 came The Bourne Supremacy, the mandatory sequel to a successful film, (especially where they already have further source material at the ready), which explored further the scarred character of Jason Bourne adding further depth and insight into his past. Or did it? Having not seen the films since their initial cinema release & discussing them with a couple of friends, surprisingly we found ourselves actually struggling to distinguish between the two.

We recalled that both were good enjoyable action flicks, and that there was a great car chase, some awesome hand to hand fighting & wait ah, that was it, the distinguising factor was some of that shaky camera stuff that was mentioned in every instance that I recall reading about the second film, but seriously I’ll have to watch them again to actually refresh myself with what actually happened in them.

Normally I would have made the effort to watch them before going to see this, but Richard ‘Filmstalker’ Brunton has kept my evenings and weekend schedule of film-watching quite on the busy side & so I tumbled along to Leicester Square for the screening for The Bourne Ultimatum feeling unprepared somewhat.

Plot Synopsis:
Rogue agent Jason Bourne (Matt Damon) is being hunted by the people in the CIA who trained him to be an assassin. Still suffering from amnesia and determined to finally learn of his true identity, he is lured out of hiding to contact a journalist named Simon Ross (Paddy Considine), who has been following his story.

Throughout his research, Ross has gathered valuable information about Bourne and the Treadstone project. This is rather inconvenient for U.S. government official Noah Vosen (David Strathairn), who is hoping to start a similar covert organisation.

With intent to kill Bourne and the journalist before they expose the program’s disturbing secrets, Vosen sends agent Pamela Landy (Joan Allen) to lead the search effort. Simultaneously, Paz (Edgar Ramirez), one of the remaining living Treadstone assassins, is dispatched to find and neutralize Bourne and Ross. In order to finally learn of his true origins and find inner peace, Bourne will have to evade, out-maneuver, and outsmart the deadliest group of highly-trained agents and assassins yet.

Review:
Bearing in mind this is officially the year of three-quels, I expected yet another rehash of the prior Bourne films, whereby Jason Bourne stumbles across some information, follows this up, chases answers about his past, taking him from one country to the next with the expected as standard, hand-to-hand action fights, car chases et al, as I mentioned above, but with a higher budget to treat us with bigger explosions & more battered cars.

To an extent I was right, all the above ingredients are in the mix, but I got more. At the risk of shadowing into spoiler territory, what Jason Bourne discovers this time round is more substantial. Actual answers and a level of closure that it’s predecessor lacked came as a pleasant surprise for me.

Speaking of which, it seems mandatory that I say something about shaking-cameras that Greengrass introduced with Supremacy. Well, either I’ve got used to it, which I sincerely doubt, or it’s been toned down. I’m going to discard the concern with, yes, there were instances with jittery cameras involved, but it’s not distracting this time.

Matt Damon has certainly come out of his shell, his confidence and enthusiasm comes across throughout. You’re no longer thinking, “but he’s just a baby-faced boy”. You’re thinking: He’s pretty badass, I wonder how he’d fare against Jack Bauer or James Bond. (and so the online theoretical battle of the superior JB’s ensues. If you think it’s just me, google it.)

A special mention to the spectuacular fight choreography of the film, the first major action scene in the film at Waterloo station in London, got the largest cheering from the audience as he took them all down one by one, with the surveilence capturing a snapshot of him in the process, and like an intentional kickback to old action flicks of the 80’s, a dialogue stated the plain obvious with exasperation: “Oh my God, That’s Jason Bourne.”

Anyway, like any of the JB’s in action, you do have to suspend your belief a little. The hero is going to get his way, no matter what, through each obstacle he will charge, perhaps slowed down, but little is going to stop him. Once you get past that, you’ll find this is one of the finest action thrillers out there at the moment. Not only does it have you holding your seat with throughout, but it also has a well-written plot.

I wonder if having this Scott Z. Burns crop up in the writing department might have a hand in this? Having not read the books I couldn’t really say with much certainty how much is sourced directly, but this chapter not escalates, but also stands tall as a stand-alone film of its own merit.

Handled with a subtlety that the prior instalments (in hindsight) seemed to lack, I’d say whether you’ve seen the previous Bourne films or not, with ample doses of action, chases & thrills. This is the best action film I have seen this year, hands down!